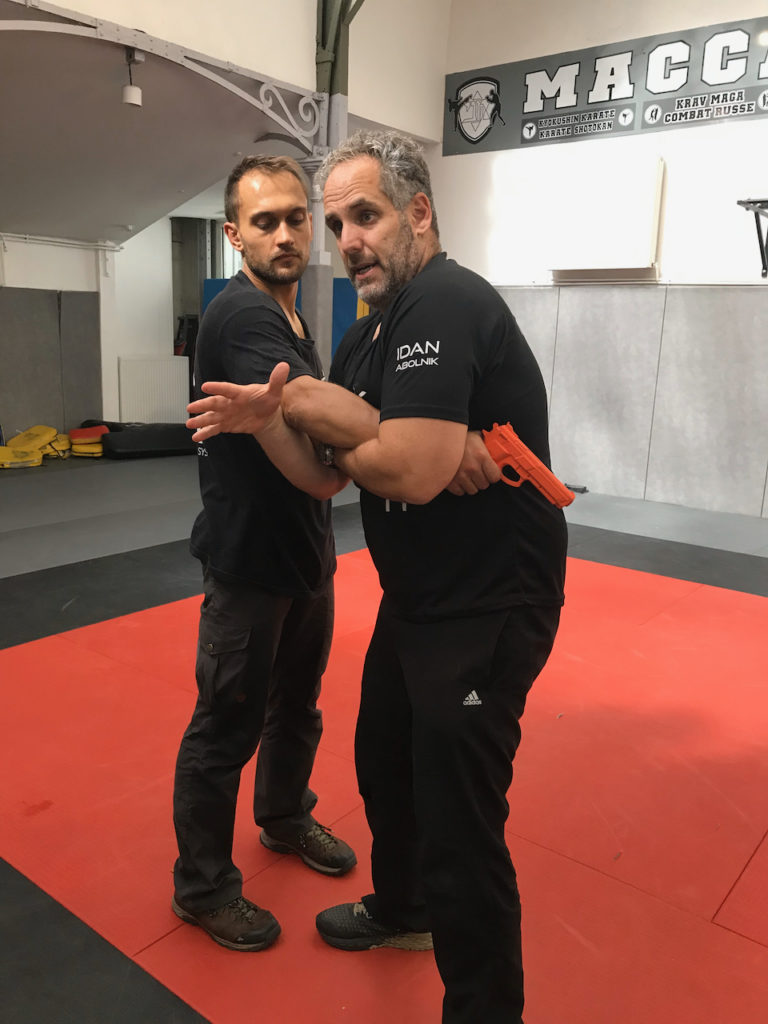 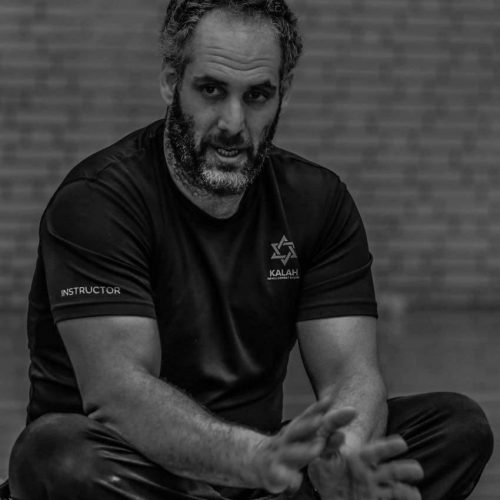 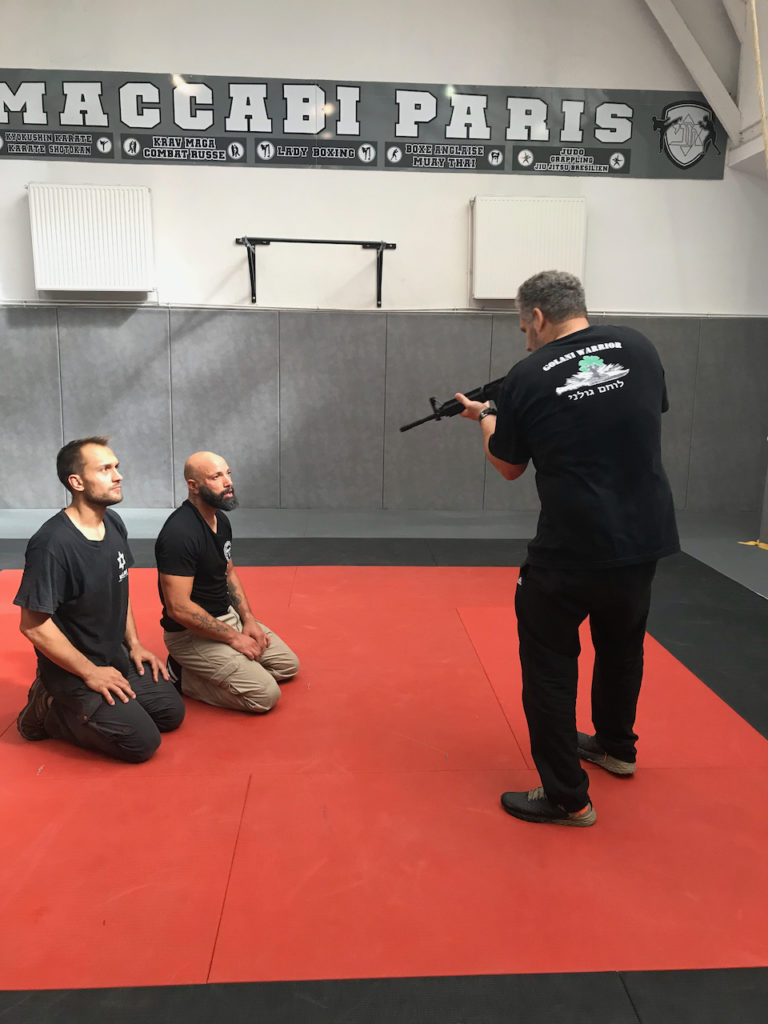 I am Idan Abolnik, the founder of KALAH, the system Krav Maga was intended to become.I was born in Israel, where I grew up in a small town called Beer Sheva. I served as a fighter in the Sayeret Golani unit since the age of 18. After my service in the IDF (Israeli Defense Force), I spent many years working in one of the highest levels of government security in Israel.

My journey with Krav Maga started when I arrived in South Africa in 2002. Similarly to many Israeli Ex-Special Forces members I opened a security company in the private sector.

One of my services was to provide Krav Maga training. I can recall my very first class to one student on a Saturday at 09:00. The first move I began to instruct the student was to counter a gun attack to the front. When I started to demonstrate the move I immediately realised that the commercial Krav Maga move would not work. This was not because my student was overly aggressive but because he gave strong, realistic resistance to my attack.

I felt very awkward and sensed the need to take a different approach to the original techniques.

I followed my first instinct by raising my hands in front of my face and submitting by saying “I don’t want to fight.” followed by an immediate response attack.

My student was completely stunned requesting that I show him the move again but slowly. A sense of panic rose in me as I did not remember how to repeat the instinctual move. I had no recollection of what I did. Thankfully, instinct kicked in once again and the moment he pointed the gun at me, the move came back to me exactly as I did it before.

It was at that moment that I realised that God has chosen me to develop a new Krav Maga system. After this experience I practiced, tested and broke down each and every original Krav Maga technique in my knowledge. I was shocked at how 90% of the techniques were not effective at all when my opponent started to resist me aggressively and realistically.

At this point I decided to do extensive research on what original/ commercial Krav Maga is all about starting from when it first came into existence.

Imi Lichtenfeld, the founder of Krav Maga, is well known by people worldwide. Lichtenfield trained the Israeli underground units and protected the Jewish people during the 2nd World War. What people don’t understand is that Krav Maga, as Lichtenfield intended it, is not really a “system”. Technically speaking a “system” refers to a set of rules that governs structure and Krav Maga offers no rules at all. It is purely about SURVIVAL!

The best Krav Maga implementers are those who don’t do Krav Maga but merely survive attacks on the streets from day to day. I am sure that many of us have had a glimpse of what a real fight is all about, whether we were part of it or merely observers.

There are no high kicks, sidekicks or jumping on people’s limbs to get them into a lock. This is even more accurate once we take the military aspect of Krav Maga into consideration. Deliberate, for a moment, on a soldier who is carrying extremely heavy equipment; rifles, guns, knives, grenades and sensitive explosives. It is simply impractical to expect the soldier to execute high kicks or any form of showy maneuvers.

I have travelled through many countries, including Israel, and have been staggered to see how unrealistically their training is conducted. First, I could not understand how instructors believe that they are training their students to survive aggressive attacks in the street or even in the battlefield by training with a mouth guard, skin guard or groin protection. This type of training indicates that you are training for sports and not combat or survival.

I served in two wars in Israel and I remember our Krav Maga training vividly, it was realistic to a frightening extent. After your first live mission you begin to understand why the trainers enforced such high levels of aggression and lack of protective gear during our training.

Secondly, I assure you that you are in for a big surprise if you think sweating, kicking and punching a bag aggressively for 30 minutes will teach you how to survive in a real combat situation. You have crazed people prowling out there in the real world who will not stop attacking, even by a bullet. Punching and kicking will definitely not stop people with this mentality. The blasting techniques taught in commercial Krav Maga will not be effective because the striking in this technique drives the opponent further away from you making it extremely hard to control and secure any weapons or the attacker himself.

I am sad to say that the Krav Maga we see today has become another sport. I disagree that it a combat survival system at all. Many of the Israeli Special Forces today use Krav Maga as an aggression exercise. I agree that soldiers need to have a strong mentality, extreme focus and determination to complete their missions, no matter what, and that aggression exercises are very important to drill it into them. This is, however, by no means more important than equipping the solider with effective close combat techniques.

I recently visited the Israeli Defense Force (IDF) and analysed the effectiveness of their Krav Maga techniques. I was appalled at the outcome and immediately arranged a meeting with one of the chief Krav Maga instructors of the Anti-Terror unit. I openly asked him about the poor quality of their techniques. His answer was that the army doesn’t have a lot of time to spend on each soldier and since they do not use much close combat in the field in modern warfare, the Krav Maga training is rushed. He admitted that their techniques are very basic and he agreed that they are not effective in combat.

We have more or less forty Special Forces units in the IDF alone and another ten or so units in the Israeli Police. 90% of these units get their Krav Maga training at the LOTAR Counter Terrorism Tactical Training School. This means that 90% of Krav Maga in the IDF is rotten and not just in the one specific unit I visited. There are a few other Special Forces units in the IDF, Yasam, Mistaaravan, Mezada, to name a few, which are trained in house in Krav Maga. These units have slightly better techniques than the LOTAR School, but still have a lot of room for improvement.

Do you still think Krav Maga is a good system? Is commercialised Krav Maga going to end up like other martial arts and sport systems? I am sure that if you take any mature martial arts system, Karate, Judo, Kick boxing, Muay Thai etc., you’ll find that it was originally created to be a combat system to survive brutal attacks. Today you see them in the Olympic Games and other competitive active sports. The majority of them have a belt system and the modern versions were started by a single person. Does the Krav Maga we see today start to fit the profile? It sounds very familiar to me.

Most Krav Maga schools have now started to implement the belt system and we see a lot of martial arts techniques being integrated into Krav Maga, such as Kickboxing-style high kicks, Judo-style takedowns and Hapkido-style locks which, as I pointed out previously, are completely ineffective in real combat situations.

After much extensive research I came to realize that most people do Krav Maga for fitness, fun and entertainment more than for self-defense, reducing it to nothing more than a sport. Krav Maga was also started by a single person but, unlike the modern versions we see today, his vision was never to have the system utilized as a sport. Krav Maga, just like so many other martials arts, has been changed to fit the desires of society regardless of whether it is effective in combat or not.

I believe that most Krav Maga organizations out there today only care about the amount of students they have and their public image. I understand that any Krav Maga school is a business and needs to make money to thrive, but I feel that in doing so, they have lost sight of the responsibility they have towards their students to ensure that they will survive an attack in real life. It appears to me that the instructors are more concerned about their own fame and glory by having an instructor status, than the welfare of their students. Krav Maga training has lost its realism to make it more enjoyable and in order to lure in more students. What they do not understand, or choose to ignore, is that a terrorist or attacker will not play with his victim. You have a common goal, survival!

So how is KALAH different?First, Kalah is a system from God. As David was guided by God and given a new weapon and knowledge against an enemy much greater, so, TKM has been given the realistically effective techniques to train people. Whether you are a soldier, law enforcer or civilian, TKM offers a realistic chance of survival against the gigantic terrors we face today.

Secondly, we realize that we are human, flesh and blood, and not super heroes. We train realistically, resisting our opponents from beginning to end with no body protection. Our techniques and aggression are at the same level of importance in our training as this is the key to survival.

Thirdly, the system constantly adapts and develops to suit the problems we face in present times.